Handbook of Graphs and Networks in People Analytics

In this chapter we will round off our study of important graph concepts and metrics by looking at two new concepts which a people network analyst will often have good reason to study. The first concept is assortativity, and this is described as the tendency of vertices to connect or ‘attach’ to vertices with similar properties in a graph. This is effectively a measure of homophily in a network. Highly assortative networks are more robust to destructive events like the loss of vertices, but because of their concentration they can be inefficient in terms of information flow, and in organizational settings they can be problematic for diverse interaction and experience.

The second concept we will look at is vertex and graph similarity. In certain networks where information on vertex properties is not available, it may make sense to infer that two vertices are similar in some way if their immediate networks are very similar. The concept of similarity can be also extended to entire graphs. In the simplest case, we may be looking at the same set of vertices but using different definitions of connection, and we want a measure of whether those different definitions produce substantially the same network or an entirely different network. As organizations start to mine many different forms of data to define connection (email, calendar, timesheet, document collaboration to name a few), it is becoming more and more important to understand the similarities or differences between the networks generated by these data sources.

We have already seen in previous chapters that it is natural to want to study the extent to which vertices with similar ground truth properties are more densely connected in a graph. In Chapter 7, we looked at how politicians representing the same political parties connect to each other over Twitter, or how schoolchildren in the same class connect over Facebook. In the exercises at the end of that chapter, we looked at how researcher communities form over email either within or between ground truth research departments.

The assortativity coefficient of a graph is a measure of the extent to which vertices with the same properties connect to each other. It is a relatively recently defined metric and is defined slightly differently according to whether the property of interest is categorical (e.g., department or political party) or numeric (e.g., degree centrality). See Newman (2002) for a full description and mathematical definition.

This suggests moderate assortativity, or moderate likelihood that students in the same class will be Facebook friends. Now let’s compare to ‘real’ reported friendships.

We see substantially higher assortativity by class for reported friendships, indicating that being in the same class is more strongly associated with developing a reported school friendship.

Playing around: You may remember the concept of modularity which we introduced in Chapter 7. For categorical vertex properties, modularity and assortativity effectively measure similar concepts. Calculate the modularity for the Facebook schoolfriends by class and compare it to the assortativity. Also, play around with some prior data sets and calculate the assortativity of some of the communities we detected in Chapter 7. Recall also our example from Chapter 5 where we divided up the workfrance population to have tables with a good mix of different departments. If you completed that exercise, you may be interested to compare the assortativity of that population by department versus by table to get a measure of how successful you were at creating diverse tables.

Again, let’s use our schoolfriends networks as an example to calculate degree assortativity in R.

Although it is a relatively recent concept, assortativity is a useful measure in understanding people or organizational networks. Highly assortative networks demonstrate resilience in that knowledge, community and other social capital are concentrated in a strong core, and disruptions such as departures of actors from those networks are less likely to affect the network as a whole. However, such networks also demonstrate characteristics which are counterproductive to diversity and inclusion and can represent challenging environments for new entrants to adjust to.

Often we are not lucky enough to have really rich ground truth information on the vertices in a network. This is particularly the case if we need to analyze people networks under anonymization constraints. Nevertheless, as we have seen with examples in previous chapters like the workfrance graph and the ontariopol graph, computational methods allow us to infer conclusions about vertices and groups of vertices that can often be good estimates of the ground truth properties of those vertices. In some networks, we can conclude that vertices are similar in some way if they share very similar immediate connections. For example, in our workfrance graph, if two vertices have first degree networks that overlap to a large degree, it would not be unreasonable to infer a likelihood that those two vertices are from the same department.

To illustrate these three types of vertex similarity coefficients and show how they are calculated in R, let’s bring back our \(G_{14}\) unweighted graph from Chapters 5 and 6, and visualize it again in Figure 8.1. 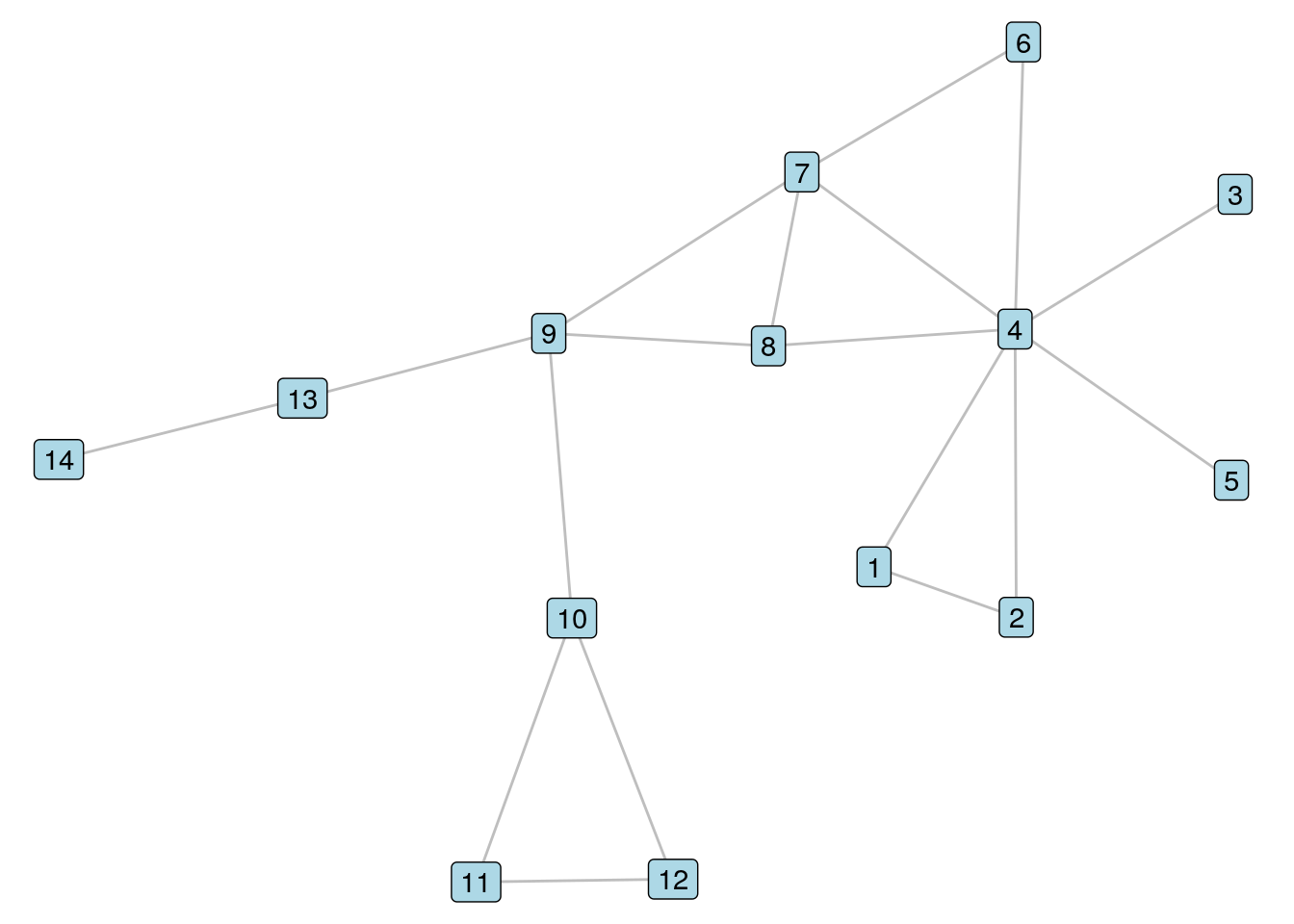 We see in the off-diagonal components of this matrix confirmation of a Jaccard similarity coefficient of 0.4.

The output of this similarity() function variant returns the similarity of the selected vertices with all vertices in the network—try it if you like. In order to extract the specific similarity for Vertices 7 and 8, we should ensure to label the rows and columns of the matrix by vertex name before extracting a specific value from it.

Playing around: Go back to some of our prior examples from Chapter 7 where we detected communities of more densely connected vertices in graphs like schoolfriends and ontariopol. Play around with calculating the similarity between pairs of vertices inside communities versus between communities and think about whether the results make sense.

The general question of whether two graphs which contain vertices representing different entities still exhibit similar internal patterns and structures is of great interest in computer science and image recognition. The graph isomorphism problem, for example, is a computational problem concerned with finding a function that exactly maps the vertices of one graph onto other74.

In organizational network analysis we are usually more concerned with comparing graphs where the vertices represent the same entities (usually people), and where the vertex set is identical but where the edge set may be different. An example of this is our schoolfriends data set from earlier in this chapter, where the vertices are the same set of high school students, but where the edge sets are different according to whether the friendships are Facebook friendships or reported friendships. In this situation, we can use a common set similarity metric from set theory to determine how similar our graphs are.

Note that a Jaccard similarity of 1 means that both graphs have identical edge sets and so are identical in structure, and a similarity of 0 means that both graphs have no edges in common. Let’s try this on our schoolfriends graphs. To do a fair comparison, we will redefine our Facebook schoolfriends graph to be a directed graph where edges always go in both directions.

We see that there is only about 10% similarity between the Facebook friendships and the ‘real’ reported friendships.

8.4 Calculating assortativity and similarity in Python

To demonstrate assortativity functions, we load up the schoolfriends data sets.

The following functions can be used to calculate categorical assortativity and degree assortativity, respectively.

To calculate Jaccard similarity between two vertices, we can use the jaccard_coefficient() function in networkx. In this example, we calculate the Jaccard coefficients for two pairs of vertices in schoolfriends_fb.

Finally, to calculate Jaccard similarity of two edge sets, a simple function can be written: